Handpicked guide: The best of what to do in Barcelona

Handpicked guide: The best of what to do in Barcelona

Barcelona, the capital of Catalonia, is a beautiful coastal city that boasts of her warm climate and laid-back way of life. Beautiful natural settings, stunning man-made structures, and outstanding cultural offerings all contribute to the appeal of a vacation spot. The allure is amplified by the mild weather typical of the Mediterranean region. The Barri Gotic, a medieval district in Barcelona, has a mystical, old-world vibe and is worth visiting, but the city's Modernist buildings are what really set Barcelona apart.

After a long day of sight-seeing, visitors will want nothing more than to unwind in an upbeat environment. Tourists may mingle with the residents on La Rambla, relax on the sandy beaches by the harbor, and take their time eating on the city's many outdoor tables. One of the greatest ways to get to know Barcelona is to simply meander around until you find a little café or a peaceful town plaza where street musicians are strumming Spanish guitar melodies. The journey is full of unexpected pleasures at every turn. Be sure you know your way around Barcelona's various neighborhoods before you leave. Depending on your interests, this guide can aid in your lodging decision. You can also start your exploration of Barcelona the moment you land by listening to a self-guided audio tour provided by Vox City.

Check out our recommended Barcelona attractions to find out where to go and what to do during your stay.

The Gothic Quarter has served as the city's cultural and religious epicenter for over two millennia. Ancient Roman ruins can still be seen here, however the most of the historic sites in this area date back to the middle Ages. The Cathedral de la Santa Cruz y Santa Eulalia, a church that was primarily constructed between the 13th and 15th centuries, serves as the focal point of the Gothic Quarter. Countless winding lanes and pathways made of cobblestone surround the church. 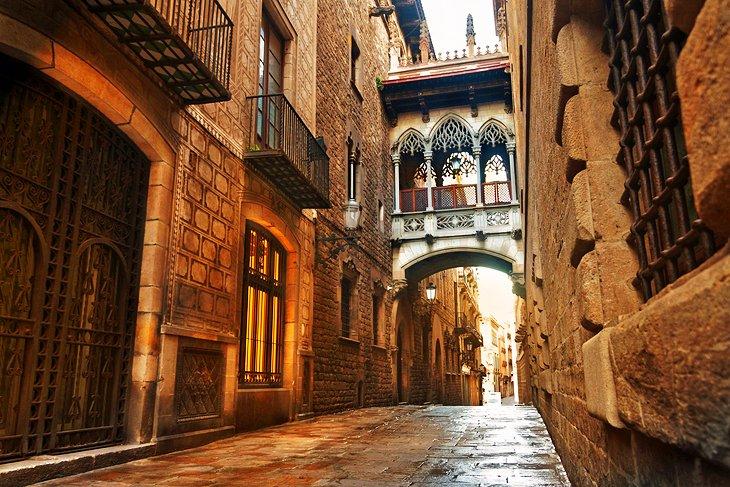 Visitors will delight in exploring the neighborhood's unique shops and eateries as they meander the city's winding pedestrian pathways. Getting lost in this area is a great way to experience the enchanted atmosphere of a medieval world untouched by modern transportation. The sound of people laughing and talking, or the strum of a Spanish classical guitar, fills the air in picturesque squares. In the Gothic Quarter, kids may be found playing soccer in the alleys and locals can be found mingling on the sidewalk terraces of cafés located in secret courtyards.

La Rambla, a broad, tree-shaded avenue that splits the Old Town in two, is where the majority of Barcelona's social activity takes place. Beginning in Plaça de Catalunya, where the stunning Romanesque Convent of Santa Anna from the 12th century resides, and ending at the harbor, is the famous pedestrian boulevard known as La Rambla. The wide sidewalks and abundance of businesses, restaurants, and outdoor cafes on this street have made it a hotspot for city dwellers. 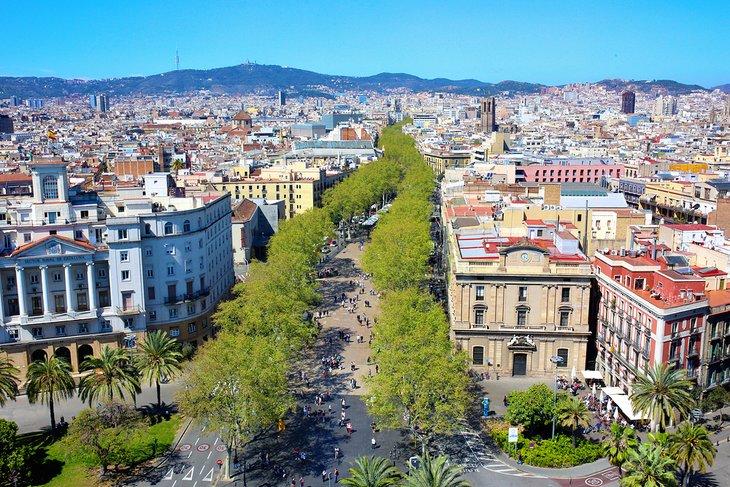 During the day, the Mercat de la Boqueria is bustling with locals conducting their weekly grocery shopping. In the evenings, La Rambla becomes a popular destination for social strolls amongst friends and families. Live music, a mime performance, or some other sort of street entertainment may be presented to passers-by on various days. La Rambla is bordered by the Barri Gtic to the northeast, and about halfway down the boulevard is the Plaça Reial, a beautiful palm-fringed square surrounded by old homes. The shops, cafes, and eateries in these high-class structures are housed within covered walkways called arcades. The three-spout Fountain of the Three Graces stands in the middle, flanked by two winged dragon-shaped street lamps by Antoni Gaud.

Palau de la Msica Catalana was planned by architect Llus Domènech I Montaner and constructed between 1905 and 1908 as a concert venue for the choral organization Orfeó Català. A plethora of mosaics, sculptures, and fine ironwork cover the facade. The interior of the Concert Auditorium is just as bright and fantastical as the exterior. This gorgeous theater, decorated with Art Nouveau floral patterns and fruit motifs, is a fantastic venue for musical concerts. The music hall is the only auditorium in Europe that uses purely natural light during the day, seating over 2,200 people. 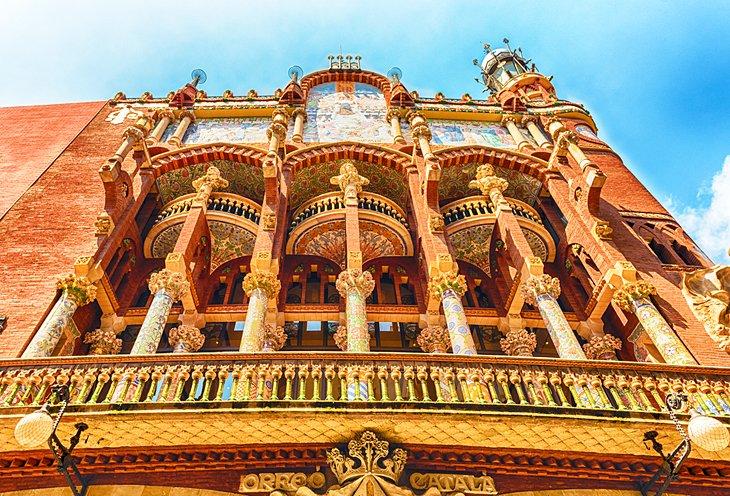 The walls and ceiling of the Concert Auditorium are completely covered in stunning pieces of art. Stained-glass windows make up the majority of two walls. There is a massive stained glass skylight by Antoni Rigalt at the center of the ceiling, depicting the sun and sky in colors of gold within a blue dome. The music stage is surrounded by ornate sculptures of muses. The Palau de la Msica Catalana has a year-round concert schedule that features a wide variety of musical genres (from pop to Spanish guitar and flamenco to jazz and opera). By booking a self-guided tour with Vox City, you may experience the inside of the Palau de la Msica Catalana at your own pace, without having to worry about bothering other visitors.

This 19-hectare hillside park is full of color, happiness, and whimsicality; it is a UNESCO World Heritage Site. Built by Antoni Gaud between 1900 and 1914, Park Güell is comprised of eight acres of natural forest and twelve acres of groomed gardens (pine forest and olive groves). The park is filled with beautiful features including fountains, viaducts, grottos, a colonnaded hall, winding staircases, and semi-enclosed conversation seats. Spectacular mosaics crafted from broken ceramic tiles adorn these imaginative buildings. 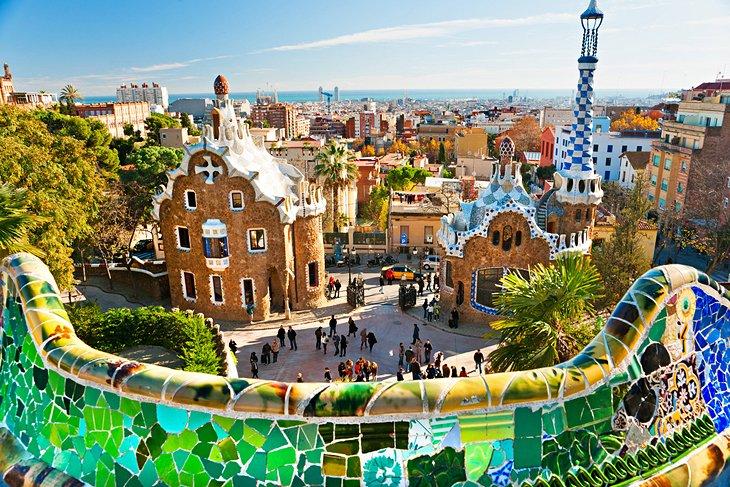 Picnic spaces and a stunning terrace with breathtaking views of the city and the sea are available. The Gràcia neighborhood was one of Gaud's favorites, and it's where he made his house. Gaud spent nearly two decades of his life in the Casa Museu Gaud (Gaud House Museum) in Park Güell. People can learn about Gaud's life and architecture from the exhibits at the museum. The range features Gaud-designed furniture and other home furnishings. Entry to Parc Güell requires a paid admission ticket. Given its status as a top tourist attraction in Barcelona, visitors are advised to come here first thing in the morning to beat the throng. Vox City also offers self-guided excursions of this breathtaking locale.

For lovers of football (soccer), Camp Nou is a must-see destination, much as Catalan Modernist structures are for those who enjoy architecture. Camp Nou, current home of FC Barcelona, was a venue for the 1992 Summer Olympics in Barcelona. The stadium holds 99,354 people, making it the second largest in the world. Stunning self-guided trips of this locale are available from Vox City. The Barça Museum showcases FC Barcelona's winning trophies, photographs, and multimedia displays, such as goal celebration films. 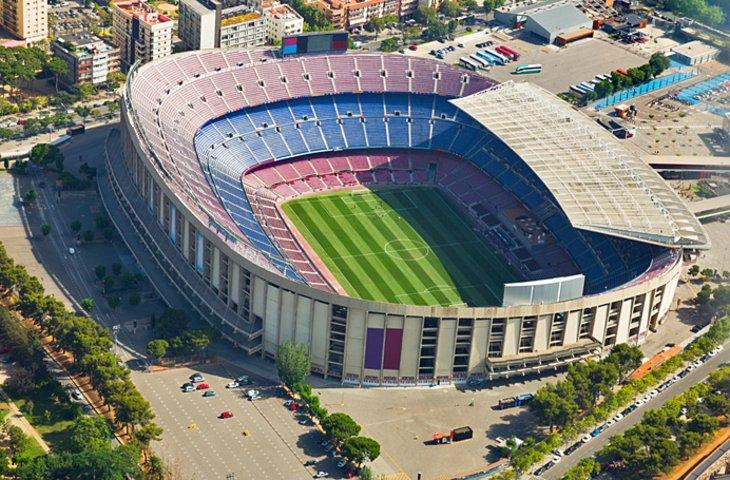 At the Barça Cafe in Camp Nou, patrons may enjoy watching games on large screens both in real time and later. Traditional Catalan delicacies, such as grilled meat and fish cooked in a wood-fired oven, and some of the FC Barcelona players' favorite tapas are prepared in an open kitchen where customers can witness the action.

The Magic Fountain of Montjuic, located in the Montjuic district in Plaça d'Espanya, is one of the city's most popular nighttime attractions. Montjuc's massive Art Deco fountain was created by Carles Buigas for the 1929 International Exposition. 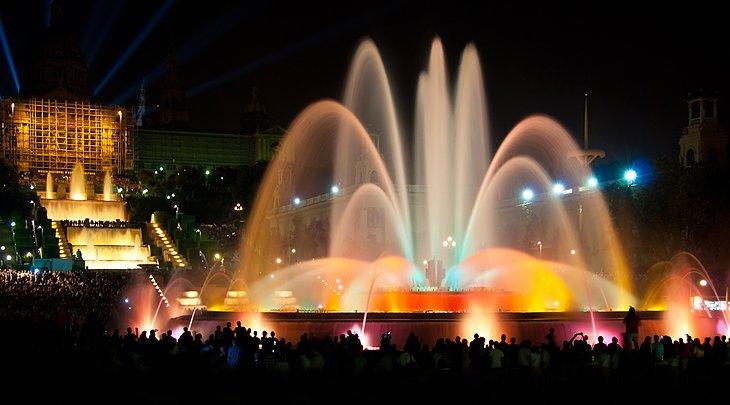 Music-accompanied light and fountain presentations at Montjuc's Magic Fountain are a treat for viewers of all ages. Throughout the summer, the performances are on Thursday through Sunday, and during the rest of the year, they are on Friday and Saturday. The evening performances typically run several hours and feature musical sets every half hour.

This hillside community got its name, "Mont Juc," from the Hebrew for "Mountain of the Jews," because it was built atop a historic Jewish cemetery. The hilltop fortification of Castell de Montjuc sits 213 meters above sea level, and the hillside itself drops precipitously to the coastline below. The Parc de Montjuic, a gorgeous natural park with breathtaking vistas, serves as the crown jewel of this picturesque region. The Museu Nacional d'Art de Catalunya is a must-see when visiting Montjuc (National Art Museum of Catalonia). The museum's collection spans the 10th to the 20th century and includes works of sculpture, painting, drawing, engraving, and photography at the Palau Nacional. The museum also features European Renaissance and Baroque pieces, as well as post-World War II avant-garde works within its modern art collection. 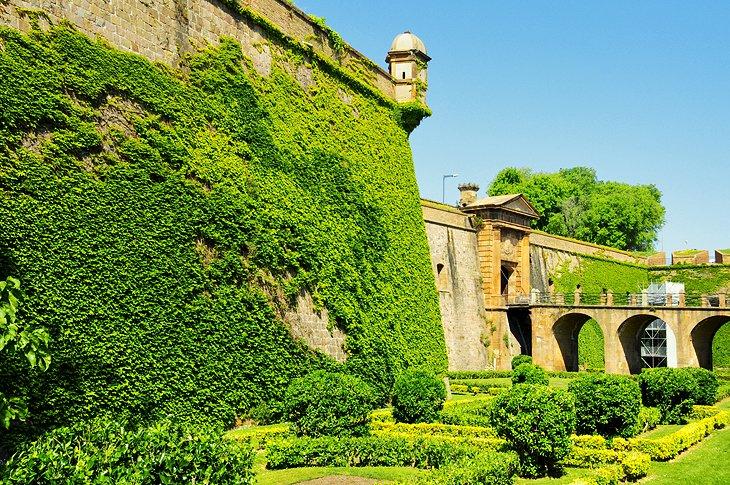 Vox City also provides sightseeing tour, as well as self-directed audio tours, so that you may learn about Barcelona's beautiful neighborhoods and attractions at your own pace. Atop Vox City's open-top bus tour, you can take in the city's stunning panoramas at your own ease. In addition, it provides a self-guided audio tour that may be listened to whenever it's convenient for you throughout your whole stay.

There is plenty more to do than can be listed here; for a more in-depth look at each of Barcelona's unique neighborhoods, as well as day trips into neighboring Catalonia, check out our blog post on the seven best spots to visit in the city.

Do you not enjoy the typical tourist destinations? If so, then check out some of the suggestions above for getting off the beaten path.