Top 7 things to do in Oxford - Something for everyone

Top 7 things to do in Oxford - Something for everyone

Oxford is a city rich in history, home to some notable buildings, and we believe it also has a renowned university there. Jokes aside, the university is fantastic, and the colleges are worth visiting even if you don't plan on attending Oxford. You won't leave Oxford without knowing that it has a rich history, whether you take a punt ride down the Cherwell, listen to Evensong in a candlelit college chapel, or explore galleries and museums housing priceless artifacts. You can go to world-class museums, eat at the city's best restaurants, or simply stroll the laneways and take in the ambience, or you can visit hallowed halls and libraries where Nobel-prize winners, prime ministers, and literary geniuses spent their formative years. The best part is that entry in many of the city's top sights is completely free. Despite the city's reputation as a safe haven for conservative types, it actually boasts a vibrant arts and music scene, a fascinating industrial history, and winding rivers begging to be explored by kayak or paddleboard. However, you'll likely be sprinting from one attraction to another in an effort to see them all, as Oxford offers far more than simply its institutions.

Take advantage of Vox City's City, University, and Pub Walking Tours during your time in Oxford. They provide both a walking tour with a guide and a bus trip with endless on-and-off privileges.

The architecture responsible for a million photographic exposures. Oxford is known as the "city of dreaming spires," and the Radcliffe Camera lies at the very center of this fabled metropolis. To put it simply, if you ask anyone about the best sites to see in Oxford, it will be at the very top of the list. 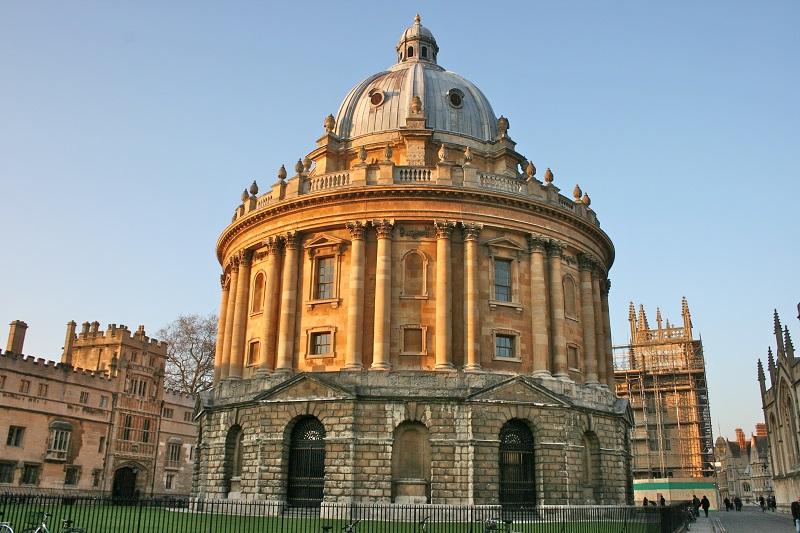 Commonly referred to as "The Rad Cam," this structure dates back to the 18th century, making it rather up-to-date for an Oxford college. It now houses a number of the Bodleian Library's collections and serves as one of the primary reading rooms. It's a working library, therefore visitors need a reservation to see it (like with the rest of the Bodleian).

The Ashmolean Museum is the most visited museum in Oxford and a must-see for anybody visiting the city. Since its founding in 1683, Oxford University has housed its historical and archaeological collections in the Ashmolean Museum, widely considered the world's first modern museum. The Ashmolean Museum is a fascinating journey through the history of various cultures from all over the world, even if it is no longer housed in its original structure (it has grown simply too big for them). 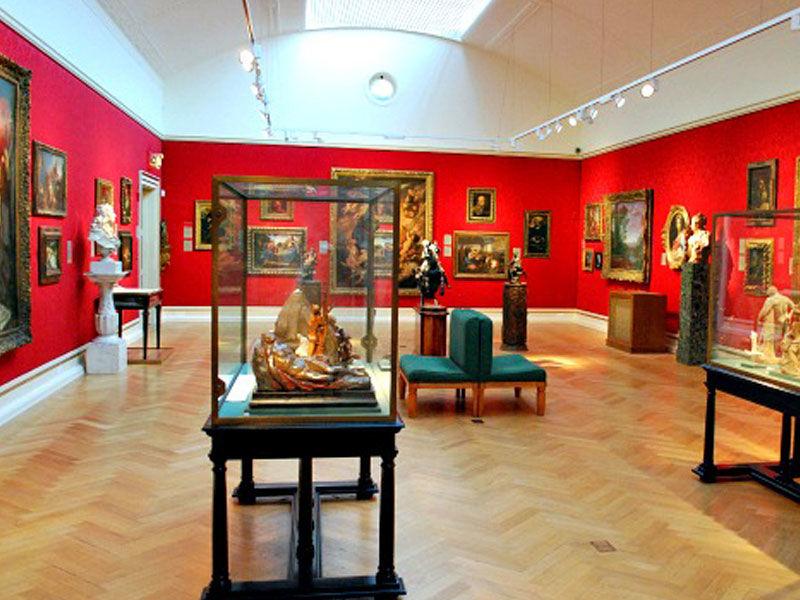 Numerous different types of artifacts and displays are included in the collection's eclectic mix. Do you wish to view life-size replicas of classical Greek and Roman sculptures? They've got your back covered. What about some Middle Eastern ceramics or textiles? During 2009, the Ashmolean Museum underwent a massive refurbishment. The spruce-up did wonders, as the collections are now neatly arranged and visually appealing. Give yourself at least a couple of hours to check everything out. Furthermore, after you're done, relax at one of the finest cafes in Oxford, located on the building's rooftop.

Punting on the Cherwell

One of the best things to do in Oxford is to go punting, preferably with a picnic and a Pimms and lemonade cocktail in hand (during the summer months). Oxford is situated at the confluence of two rivers, the Isis (Thames) and the Cherwell. Both are suitable for punting, the slightly odd type of boating in which the vessel is propelled by means of a metal pole. 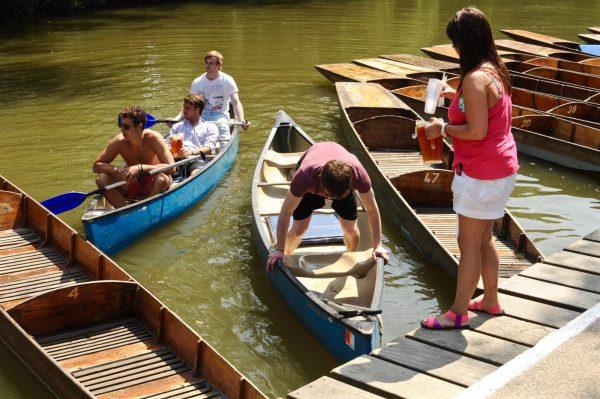 There are a number of good reasons to take the Cherwell. To begin, it's much more aesthetically pleasing than the Isis, which is, of course, crucial. Secondly, if you take a punt out of the city's core, you can gradually escape the crowds until it's just you, your group, and the (sometimes terrifying) swans who are happy to steal your lunch.

The Bridge of Sighs

The Bridge of Sighs is another famous landmark that visitors to Oxford will want to see. Because, reportedly, it resembles the equally famous Rialto Bridge in Venice. The bridge joins two sections of Hertford College, but its unique design is what draws the most attention. And just so you know, if you're heading away from the Bodleian Library, you can find the entrance to the Turf Tavern, one of Oxford's oldest and loveliest pubs, down the alley to the left of the bridge.

Enjoy multilingual voice commentary, suggesting walking itineraries, highlighting your favorite places, and identifying picture opportunities offline, day or night, on your Vox City guided tour. You can return to your guided tour at any time to continue your sightseeing. 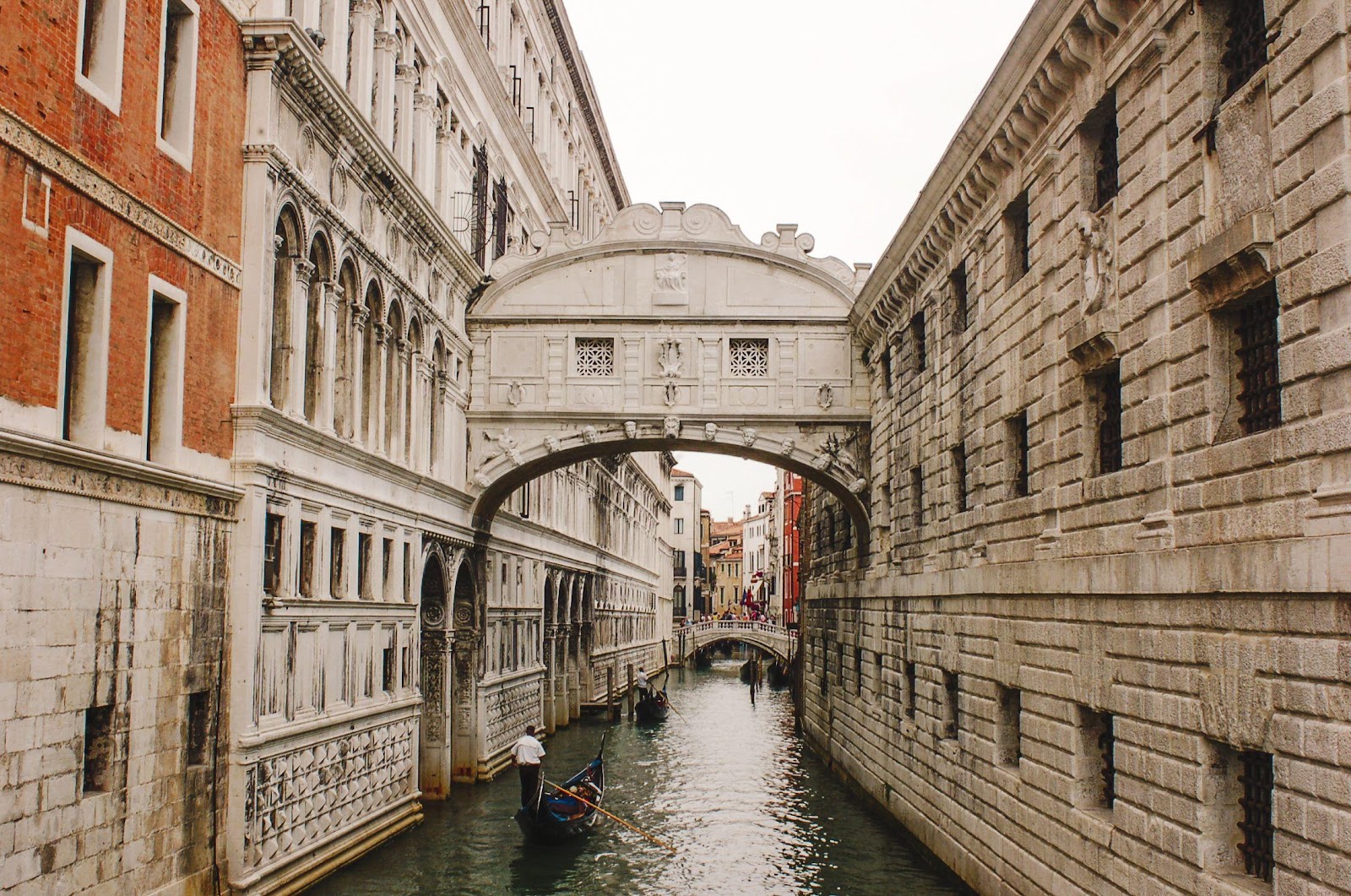 Christ Church is a gothic masterpiece that every die-hard Harry Potter fan (and who isn't?) should see if they are ever in Oxford. Filming for the Harry Potter series took place at one of Oxford's oldest and largest colleges, Christ Church, which was founded in 1525. (Which you can follow on this trail). In fact, it served as inspiration for the Great Hall in Hogwarts.

You can see that there is more to Christ Church College than just Harry Potter by visiting the Tom Tower (the main entrance) and hearing Great Tom ring 101 times every evening at 9:05 o'clock. It's a tribute to the first 101 students admitted to the college, who were instructed to adjust their watches to Oxford Time, which is five minutes behind the standard GMT. Therefore, 5 minutes after 9 o'clock at night. It also has the distinction of being Oxford's loudest bell, so you can't miss it. 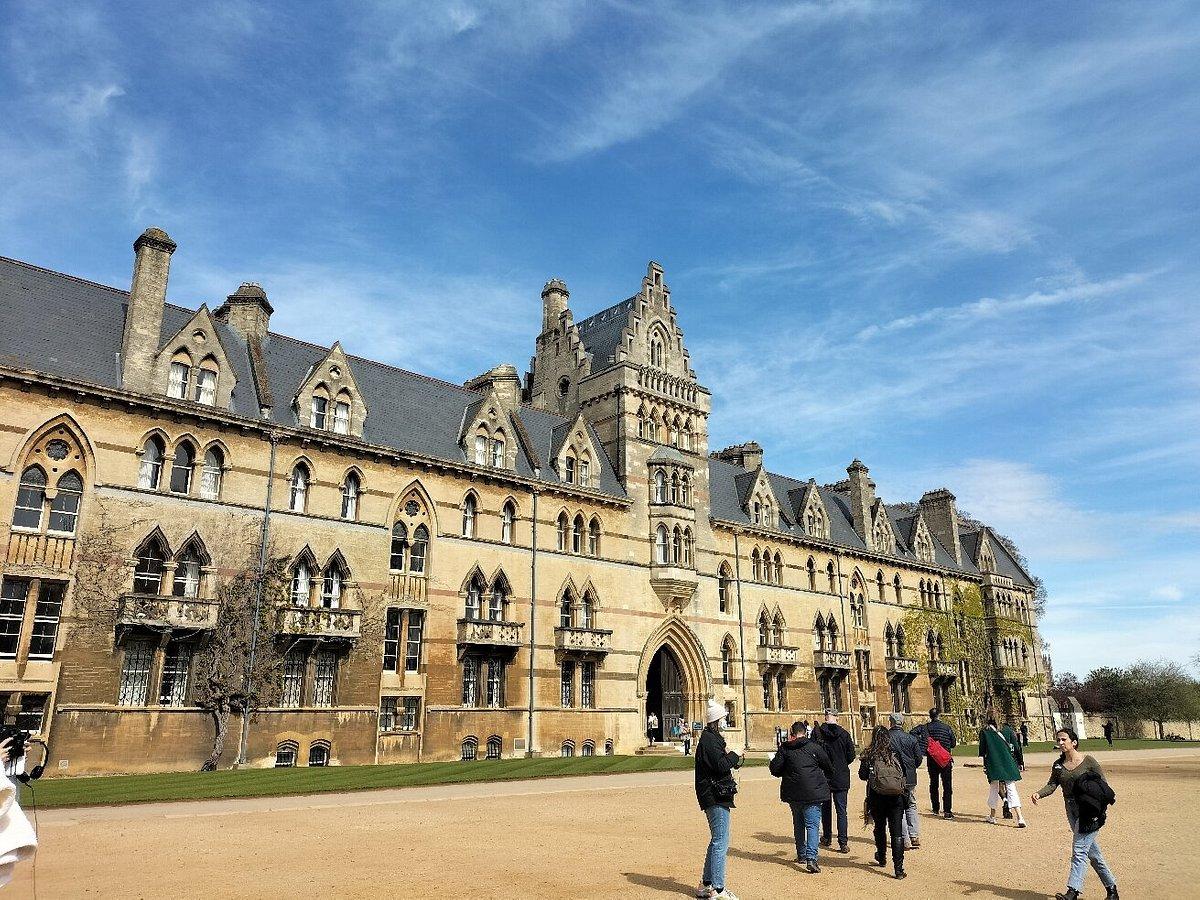 This stunning library, one of the oldest in all of Europe, first opened its doors to readers in 1598. If you're a bookworm, you'll be drooling at the sight of this Oxford attraction. For convenience, you can reserve a family-friendly city tour that visits the library and many other points of interest in Oxford. Indeed, it's wonderful! 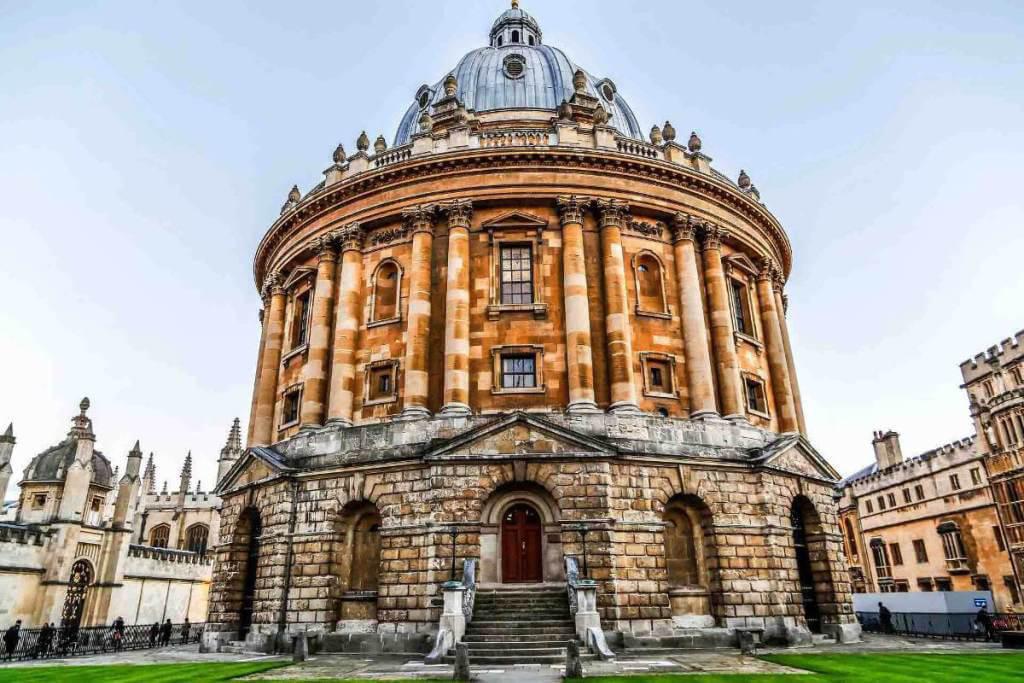 Please take the time to explore the center quad and the exhibition space on your own or with a guided tour. The Gough Map, a medieval map of Great Britain that is believed to be about 800 years old, is also housed at the library.

Vox City offers an exceptional value package for sightseeing in Oxford that includes three walking tours and a 24-hour hop-on hop-off bus trip. As you explore the city, your tour guide will regale you with fascinating anecdotes. You can rejoin the bus trip at any time, as well as the three walking tours that are included in your pass.

The Oxford Museum of Natural History, located in the same structure as the Pitt Rivers Museum, is a pleasant surprise for visitors to the city. In any case, the structure is rather lovely, especially inside where all that glass lets in so much natural light. The huge collection of zoological and geological specimens makes this museum a must-see while in Oxford. 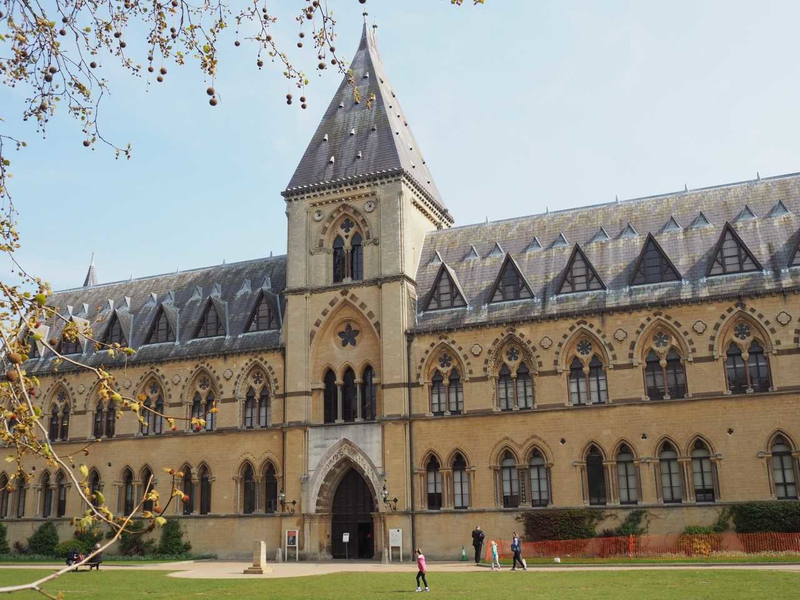 The museum's collection is dominated by enormous dinosaur skeletons. The fossils and reproductions on show allow for a detailed examination of the exhibited creatures. The Oxford Dodo, one of only a handful left in the globe, is another must-see, as it is widely believed to have served as the model for Alice in Wonderland's Mad Hatter in Lewis Carroll's classic novel.

By purchasing a ticket from Vox City, you will have access to their customizable walking tours around Oxford at your own pace.

At any point during the day, you can meet up with the local experts who will be accompanying you on the circuits, or you can come and go as you want. The Vox City app makes it easy to find your local guide and start exploring the city's many must-see attractions, such as the Radcliffe Camera and the University of Oxford. As you stroll around Oxford's quaint and lovely streets, your guide will regale you with amazing tales to keep you entertained and immersed in your surroundings. Besides being home to one of the world's best universities, the city is rich in literary and historical attractions.