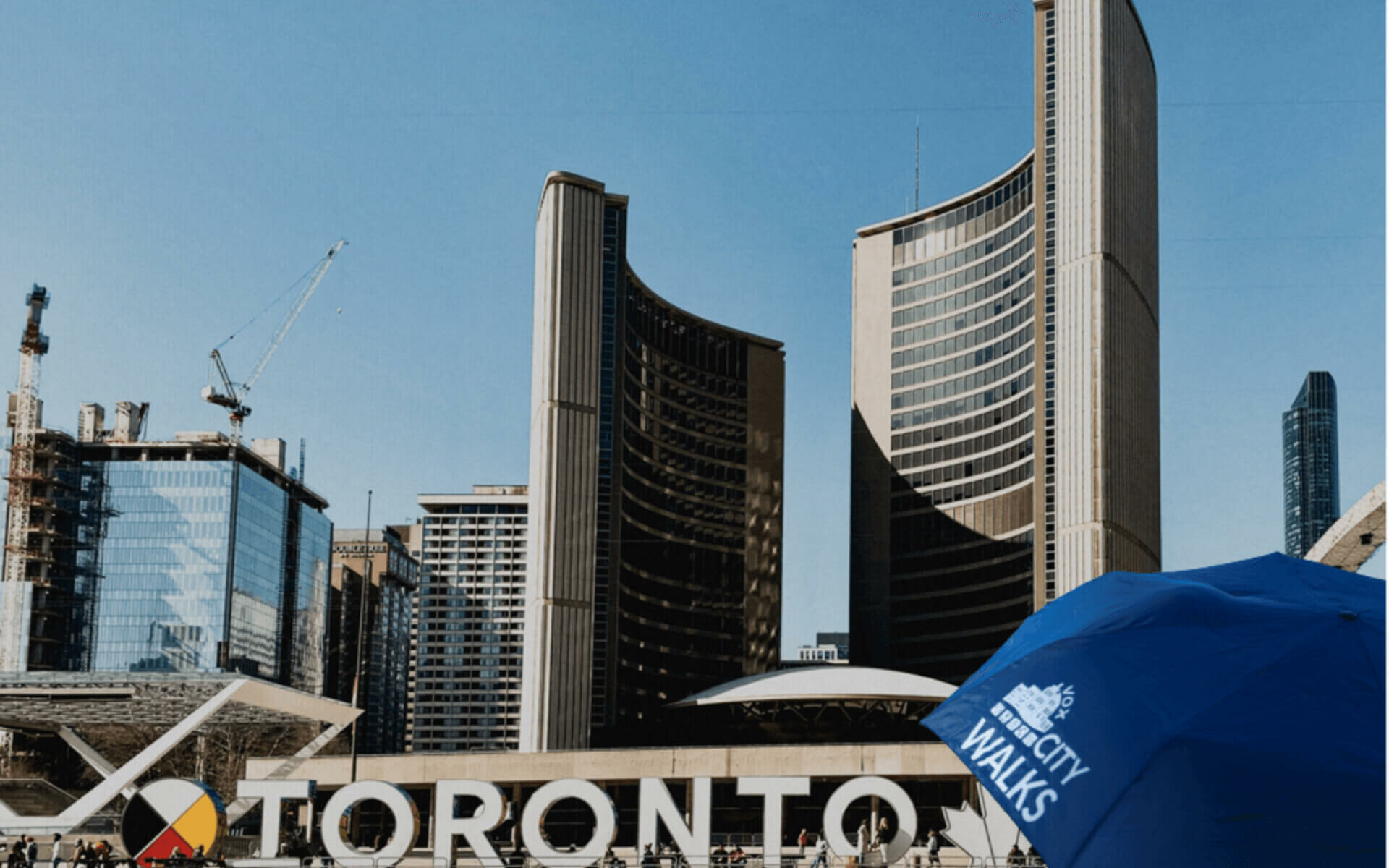 As the largest city in the world’s second-largest country, Toronto is an exciting place to be. The city is known for its multiculturalism and diversity which, in turn, has transformed it into one of the most liberal, artsy, and forward-thinking destinations in North America. And of course, wherever you find multiculturalism, you also find an epic gastronomy scene. On our Toronto guided tours, expect to be given the inside scoop on everything from its thrilling theatre scene to its art, shopping, gastronomy scene, and more.

Let us introduce you to the city of Toronto with our Downtown and Waterfront guided tour, where you will discover some of its most character-defining spots. Starting at Meridian Hall, a Mid-century masterpiece of a performing arts centre, your guide will take you past St. Lawrence’s Market to shop for locally made produce and crafts and then amble along the waterfront. Then you will get a dose of culture at the renowned Immersive Van Gogh Exhibit and Powerplant Contemporary Art Museum. On the second half of the tour, your local guide will take you to the city’s most famous buildings, including Union Station, Brookfield Place, Scotiabank Arena, and the iconic CN Tower. After revelling in the city views from 553 metres in the sky at the top of the tower, we will head back down to Earth to finish the journey at the Hockey Hall of Fame.

After you’ve become well acquainted with, see what else the city has to offer on our Highlights tour. While it is packed with history, the tour focuses more on the delicious commercial and cultural sides of the city. From the Bell Lightbox, home of the Toronto International Film Festival, to the Alexandra Theatre, Roy Thompson Hall, and Wintergarden Theatre, you will deep dive into Toronto’s obsession with cinema and theatre. Along the way, you will pass Canada’s Walk of Fame and spot the stars of celebrities that hail from this talented city. Before completing the tour in Yonge Dundas Square, the city’s commercial centre, a stop at Toronto Eaton Centre is in order, an excellent mall for a spot of shopping.

These guided tours are just 2 of 6 itineraries that you can discover in Toronto. With our free self-guided tours included in your Vox City app. In the Art Gallery self-guided tour you will discover the most artistic side of the city, visiting the Arg Gallery of Ontario and strolling through Toronto’s Chinatown. Meanwhile, the Parliament and Museum self-guided tour will show you the best museums in town as well as the impressive University of Toronto and the emblematic Parliament of Ontario buildings!

So, once you’ve completed our guided tours with your guide and feel like an honourary Toronto citizen, use the free Vox City app (included in your ticket) to discover more delightful self-guided routes in and around the city.

⚬ Your ticket is valid for 3 days. Join any of our 3 walking tours as you please during this time
⚬ The Vox City App is included in your ticket, use it to track your guide and book your spot on the tours
⚬ Guided tours depart from 10h at the main meeting point: outside the Hockey Hall of Fame, in front of the hockey players bronze statue, on the north-west corner of Yonge/Fronte Street
⚬ Using the Vox City App, discover the rest of Toronto with our 7 self-guided routes included in the price
⚬ All passes are valid for 12 months from your selected travel date. If your plans change and you’re unable to participate on your chosen date, simply use your voucher at another time
⚬ Tours operate from Thursday to Monday