The best of Florence (tourist attractions and sightseeing)

The best of Florence (tourist attractions and sightseeing)

Florence, the capital of Tuscany in Italy, is well admired around the world as a prime location to experience Renaissance art and architecture. The city was a key hub of medieval trade and business, and as a result, it became the cradle of the Italian Renaissance. Florence is famous for a number of things, including the invention of opera and the florin currency, both of which helped to pull Europe out of the Middle Ages. Although there are many notable buildings, including palaces, cathedrals, museums, and landmarks, a few rise above the rest. The features that have made Florence one of Europe's most attractive cities should be in the forefront of your mind as you plan your days of sightseeing. The city of Florence draws in millions of visitors annually because it essentially functions as one massive outdoor art museum. As a tourist, walking is your best bet for getting about Florence and seeing all the sights. The Ponte Vecchio is a stunning bridge over the Arno River, and it is home to a number of upscale jewelry boutiques, making it one of the city's top walking destinations.

This convenient guide to Florence's finest sights and activities will help you plan your trip with confidence. Here's a rundown of the top attractions in Florence:

The cathedral complex surrounding Piazza Duomo houses some of Italy's most renowned works of art in a compact space. Visit the baptistery, bell tower, cathedral, and its museum to witness works by some of the most celebrated artists and architects of the Italian Renaissance, including Ghiberti, Brunelleschi, Donatello, Giotto, and Michelangelo. Start by walking around the plaza admiring the inlaid marble exteriors, and then go inside each building to have a closer look at the stained glass works of art that adorn every surface. 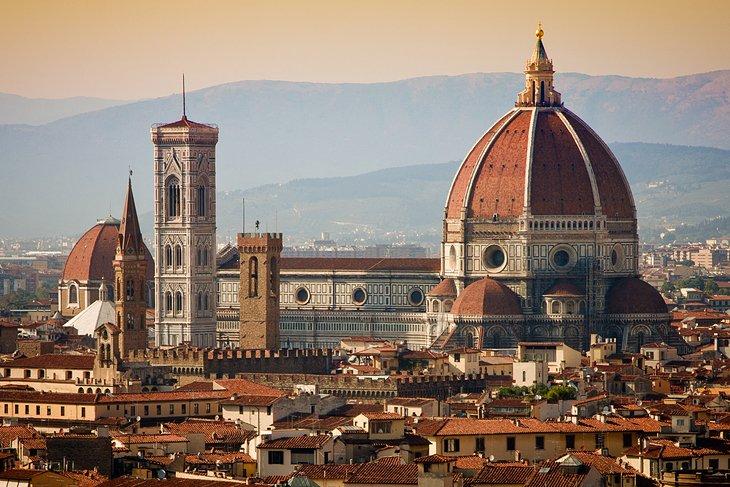 One of Europe's most culturally significant cities, Florence is well worth exploring, and the Vox City app includes both a guided walking tour and self-directed pathways to help you do so. Our hand-crafted walking tours of Florence will take you back in time to learn about the city's history, follow it as it flourishes throughout the Renaissance, and delve into the cultural heritage it has left behind.

The octagonal baptistery was constructed in the 12th century, and it is a stunning piece of architecture both inside and out. It should be on the top of your list because of its marble exterior, beautiful internal mosaics, and priceless artwork. But none of them can compare to the exquisite bronze panels that Ghiberti crafted for the cathedral's exterior doors. These gates to paradise are the finest examples of bronze sculpture ever created. The cathedral's museum, Museo dell'Opera del Duomo, is the best place to get a closer look, as it houses many of the works of art that were created specifically for the baptistery. 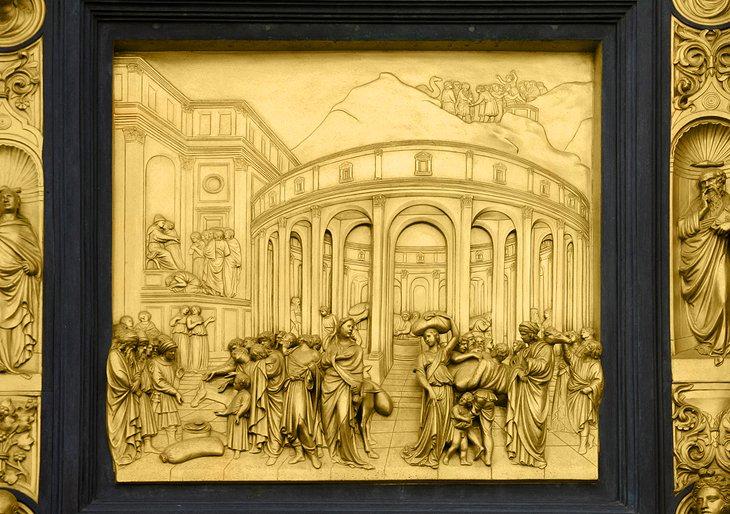 From the minute you arrive, you can start your self-guided audio tour of the Baptistery of St. John provided by Vox City. Get started right away utilizing Vox City's specialized navigation features, which render self-guiding simple and offer a plethora of suggested walking routes.

The Uffizi is widely acknowledged as one of the finest art museums in the world. Even if art isn't your major interest, you should nonetheless visit the highlights of the paintings here because of the museum's incredible diversity and quality. By comparing the stiff Byzantine art with the more naturalistic figures and landscapes of the Renaissance, you'll gain a deeper appreciation for how the artists of Florence transformed western art in the 14th through 16th centuries. The massive, riverside structure was another Medici palace, but it wasn't built as a private dwelling; rather, it was meant to house the family's expanding administrative and research operations as well as some of their prized artwork. The octagonal Tribuna, one of its most beautiful rooms, was built at the request of Francesco I de' Medici to showcase his collection of priceless artwork and jewelry.

Learn about the Uffizi Gallery on your own time with a Vox City audio guide. In the course of this trip, you will have the opportunity to view a remarkable assortment of artworks spanning the ages, from medieval to contemporary Renaissance works. The museum houses works by several famous Italian artists, such as Giotto, Michelangelo, and Simone Martini, making it a prominent cultural institution not just in Italy but across the globe. The Uffizi Gallery is one of the most photographed buildings in Florence due to its beautiful facade.

David, Michelangelo's most famous sculpture, has been replicated countless times throughout Florence, but the original may be found within this museum. The artwork has been attacked and is now protected behind glass, but that hasn't stopped it from being an inspirational piece. There are other Michelangelos and other significant works of art on display besides the David. The four unfinished slaves, destined for a tomb in Rome, are shown alongside Michelangelo's other works in the same gallery, giving the impression that the artist is in the midst of freeing them from the marble. His incomplete St. Matthew cathedral for Florence is also located here. If you don't have time to explore the Uffizi Gallery collections, be sure to check out the other galleries for highlights by Florentine artists working in the 13th through the 16th centuries. The Madonna by Sandro Botticelli is one of the best works of art ever created. 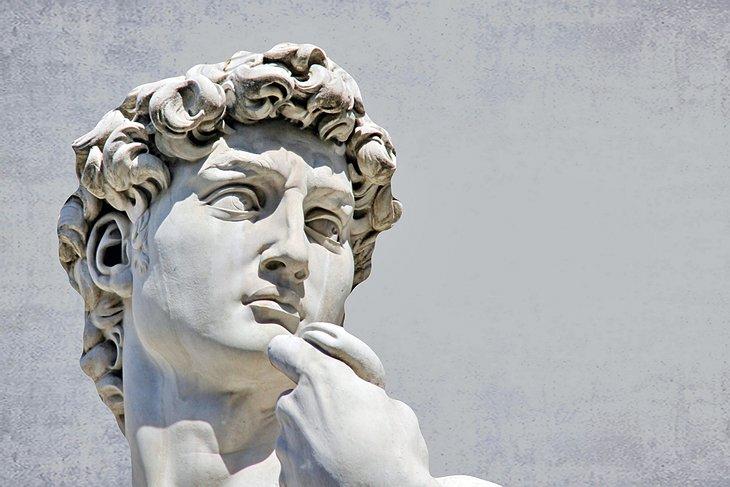 Learn about Galleria Dell'Accademia by listening to a self-guided audio tour provided by Vox City. As part of our tour, you'll learn about the background of the Accademia Gallery's Renaissance Italian art collection. Since it now houses Michelangelo's famous statue "David," the venue has become one of the city's most popular tourist destinations. Although this is the primary reason why so many people visit the museum, the main galleries also feature works by many other famous painters.

Up next comes Florence's most beautiful square, Piazza Signoria, which also happens to be its political epicenter. The town hall, Palazzo Vecchio, has a fortress-like facade from the Middle Ages and a beautiful Renaissance interior. In the 16th century, the Medici family lived there and renovated the entire place to their liking. A replica of the statue of David stands at the threshold to greet guests. The Loggia dei Lanzi was added to the Piazza in the 14th century and was initially utilized for religious and civic ceremonies. Statues from the Roman era until the early 20th century are on display now under the loggia. Artistically speaking, the head of the Medusa that "Perseus" is carrying is a masterwork by Renaissance sculptor and artist Cellini. The palace's magnificent rooms and galleries reverberate with the sounds of history, art, and power in this fortified structure in the heart of Florence. It was from these quarters that the Medici family, rulers of the city-republic, commissioned the works of the most accomplished artists and architects of the day to decorate their palaces and residences. 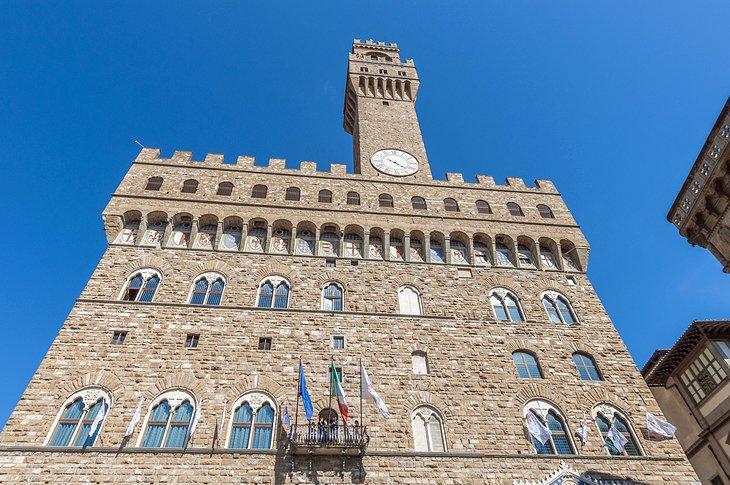 A Vox City pass grants you reserved entrance to famous attractions including the Palazzo Vecchio and a guided walking tour of Florence. A multilingual audio tour provided by Vox City will allow you to learn all about the Medici family, Florence's ruling family, as you explore Palazzo Vecchio.

To explore everything Florence has to offer would take weeks if you started out on a quest to do so. So, take your time and enjoy Florence at your own speed with the help of this guide and the Vox City app.